The Linhof Techika cameras are a reknown standard for professional large format photographers. Basically they are field cameras with a drop bed, like the Graflexes and others, but they have additional back movements close to a monorail camera. Linhof also made smaller models which, like the smaller Graflexes, could be used as press cameras. the Technika 70 is one of those smaller cameras.

The camera was built to be used as a rangefinder camera with a rollfilm back, either 120 or 70mm film. The big and clear rangefinder has frames for a 65mm wide-angle, a 100mm standard and a 180mm tele lens. It also has a combined rangefinder cam for all three lenses and 3 pairs of corresponding stops on the bed. The level is visible in the finder and there is even a built-in meter. A massive grip with a built-in cable release helps to hold and shoot the camera. There is a quick-release on each lens board to connect the cable to the lenses in no time.

The size folded is roughly 21x18 x 10 cm, which is close to my 4x5 Super Technika or my Graflex Crown, and it's very heavy, about 3 kg with a back and a lens. That's the same weight as my Super Technika and 1 kg more than a 4x5 Pacemaker Crown. That's very heavy indeed. 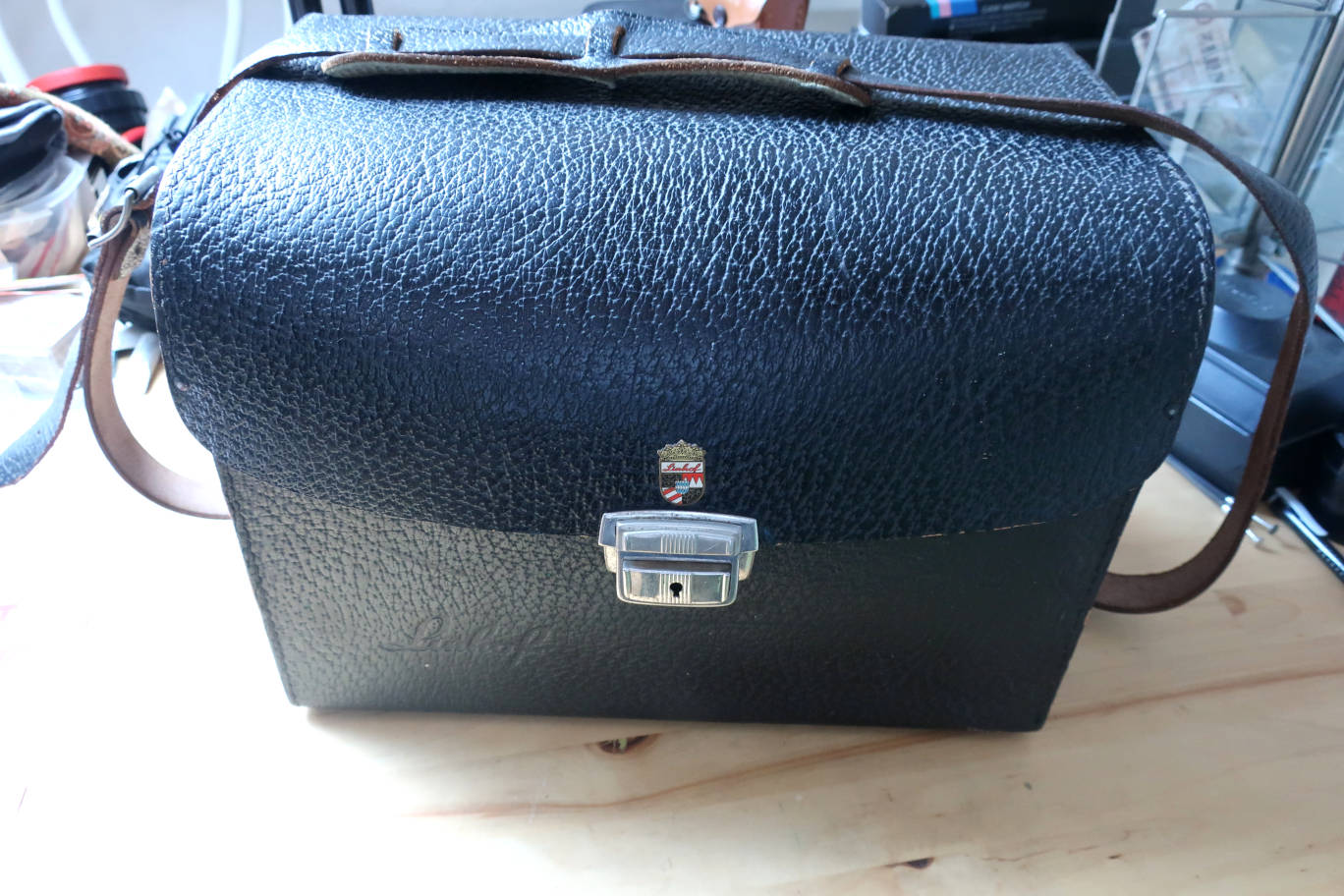 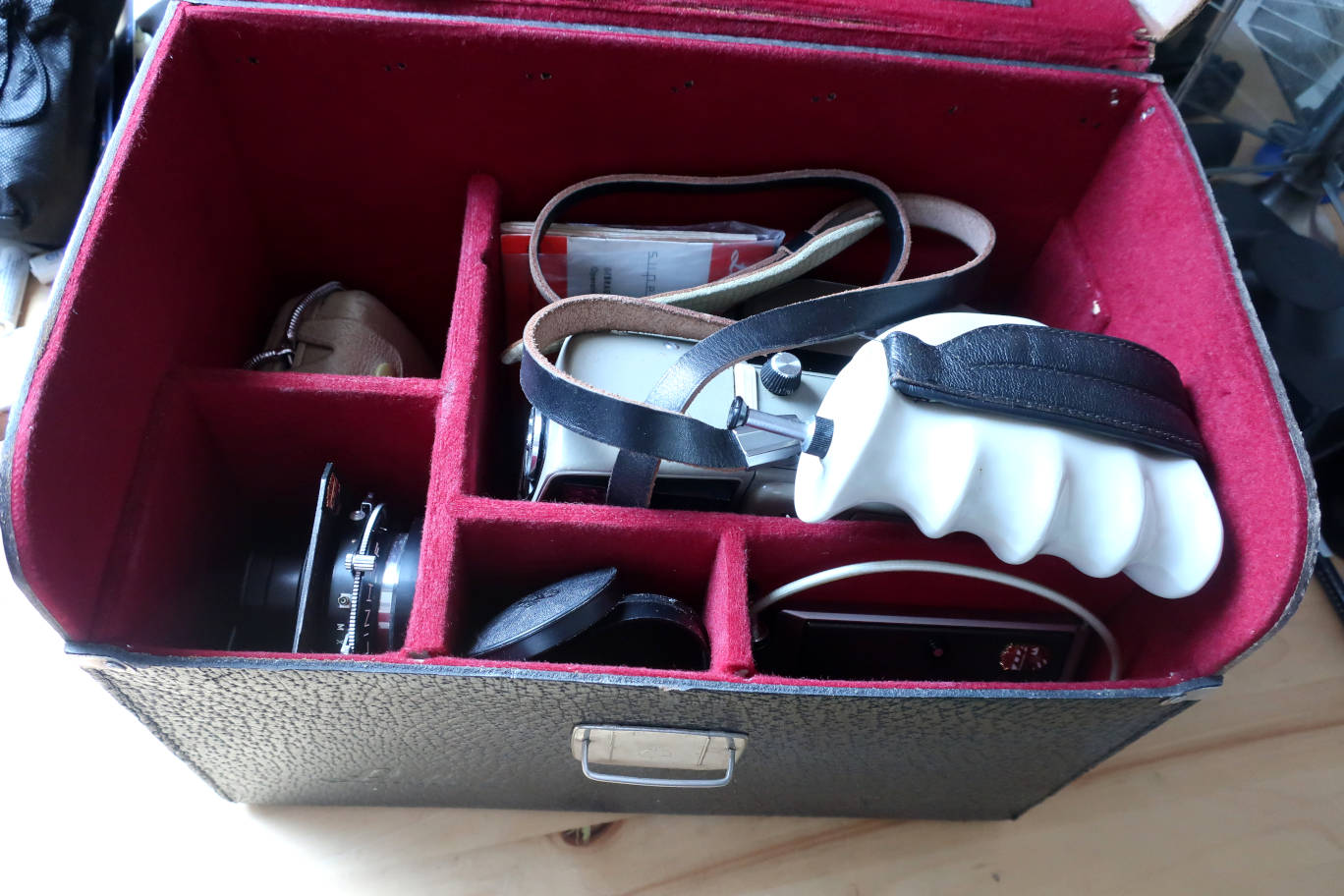 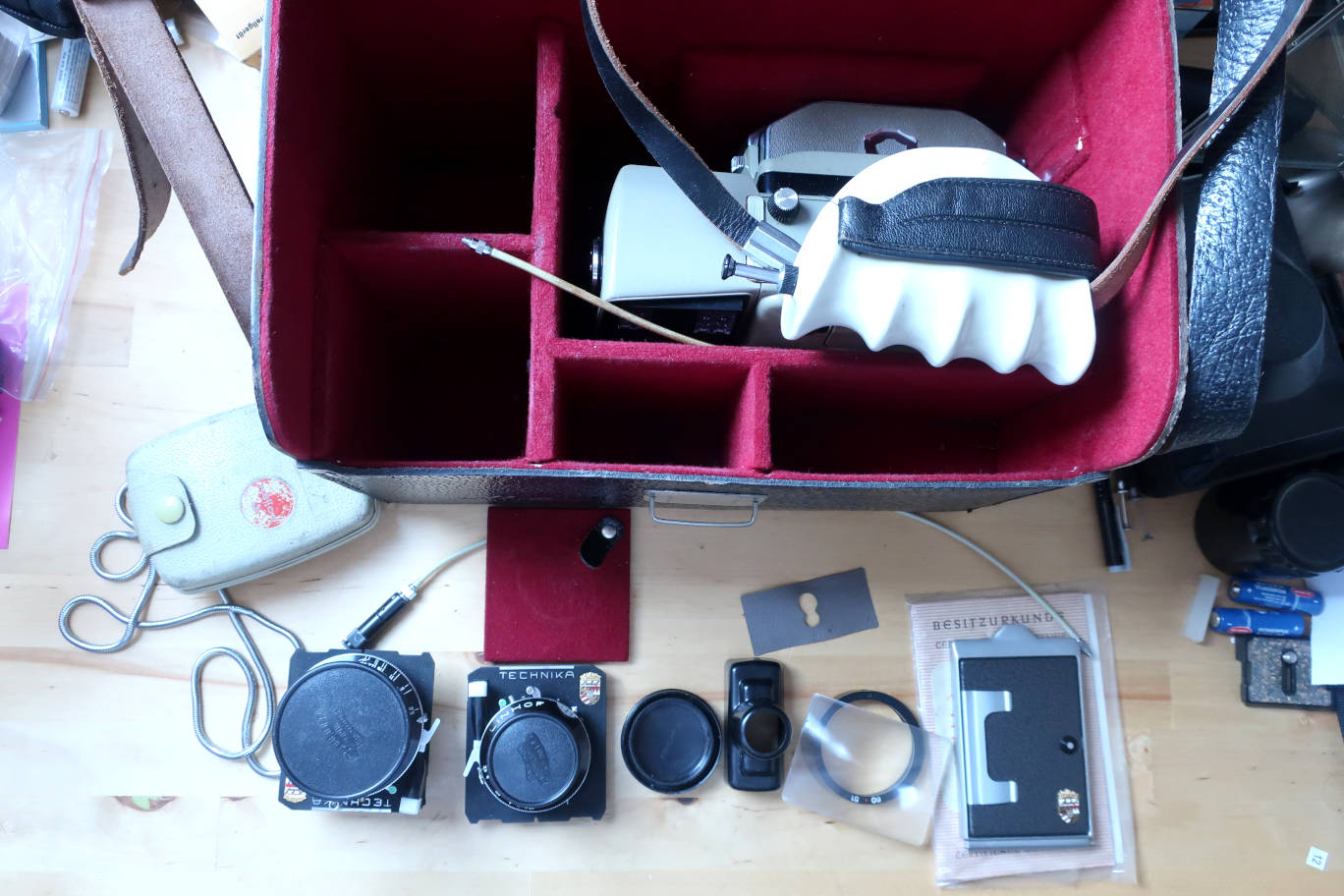 A nice set with 3 lenses and a rollfilm back. 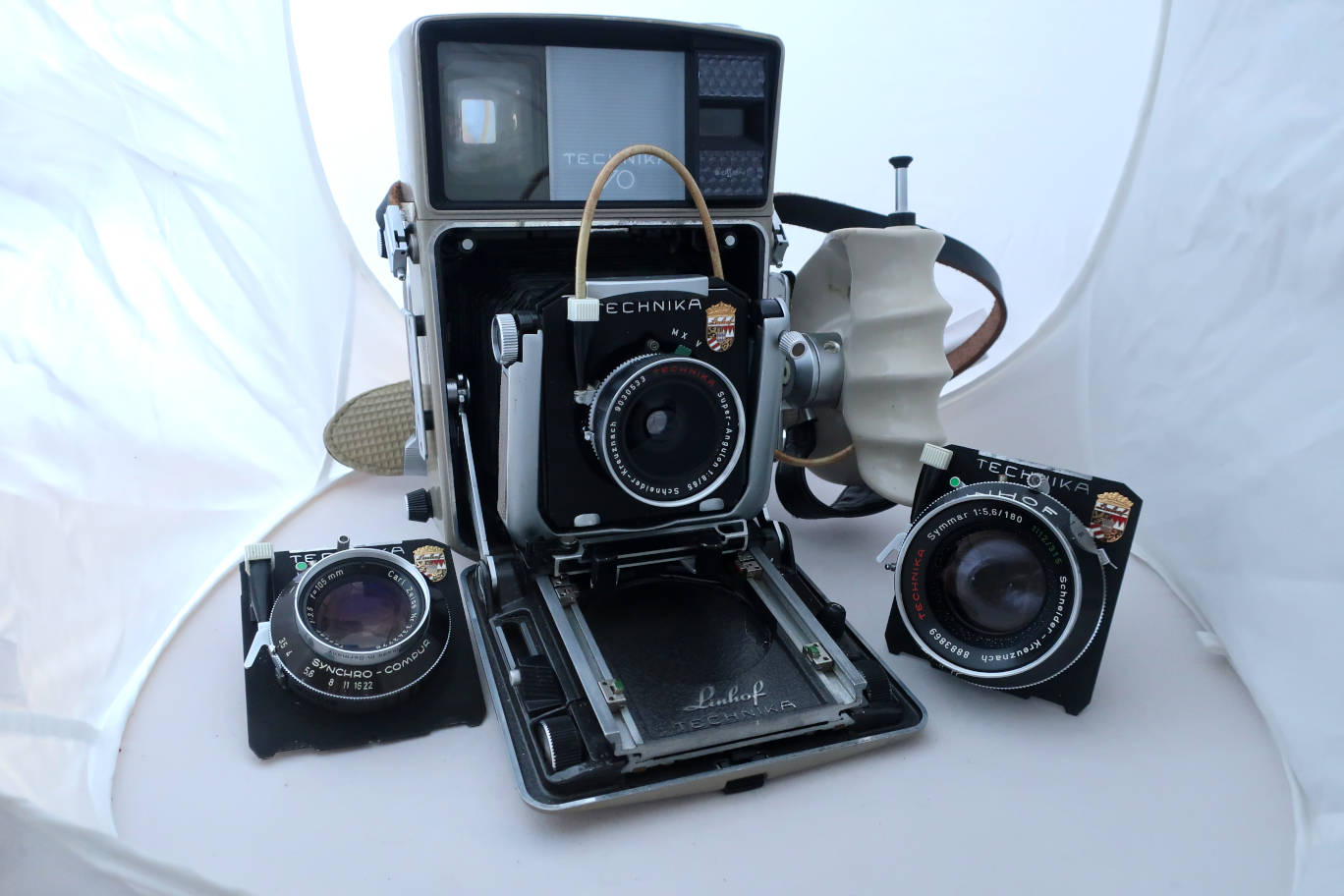 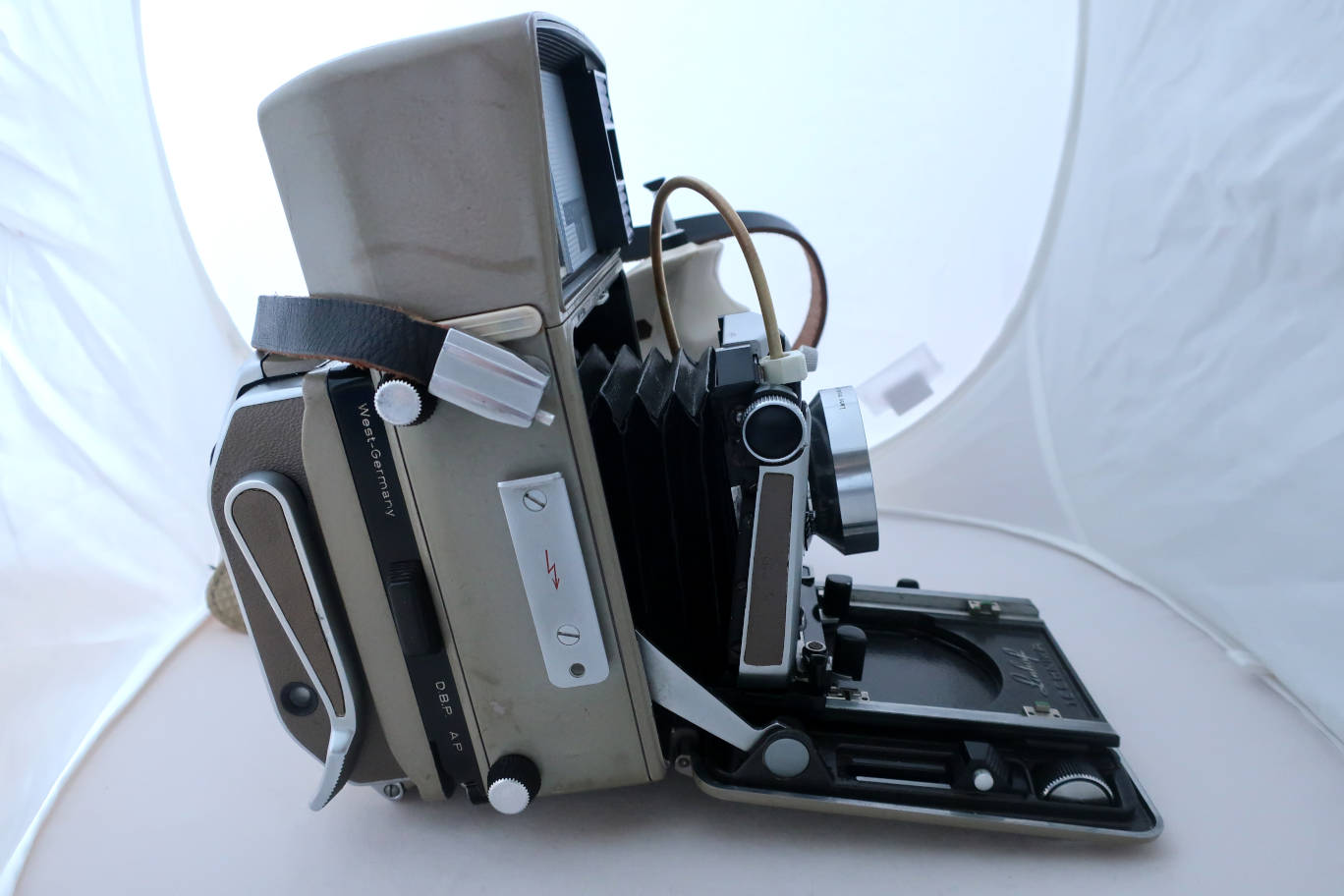 Seen from the left. The Technikas are not easy with wide angle lenses, you need a retracted lensbord and even with moderate wide angles you have to drop the bed and then compensate via tilt. 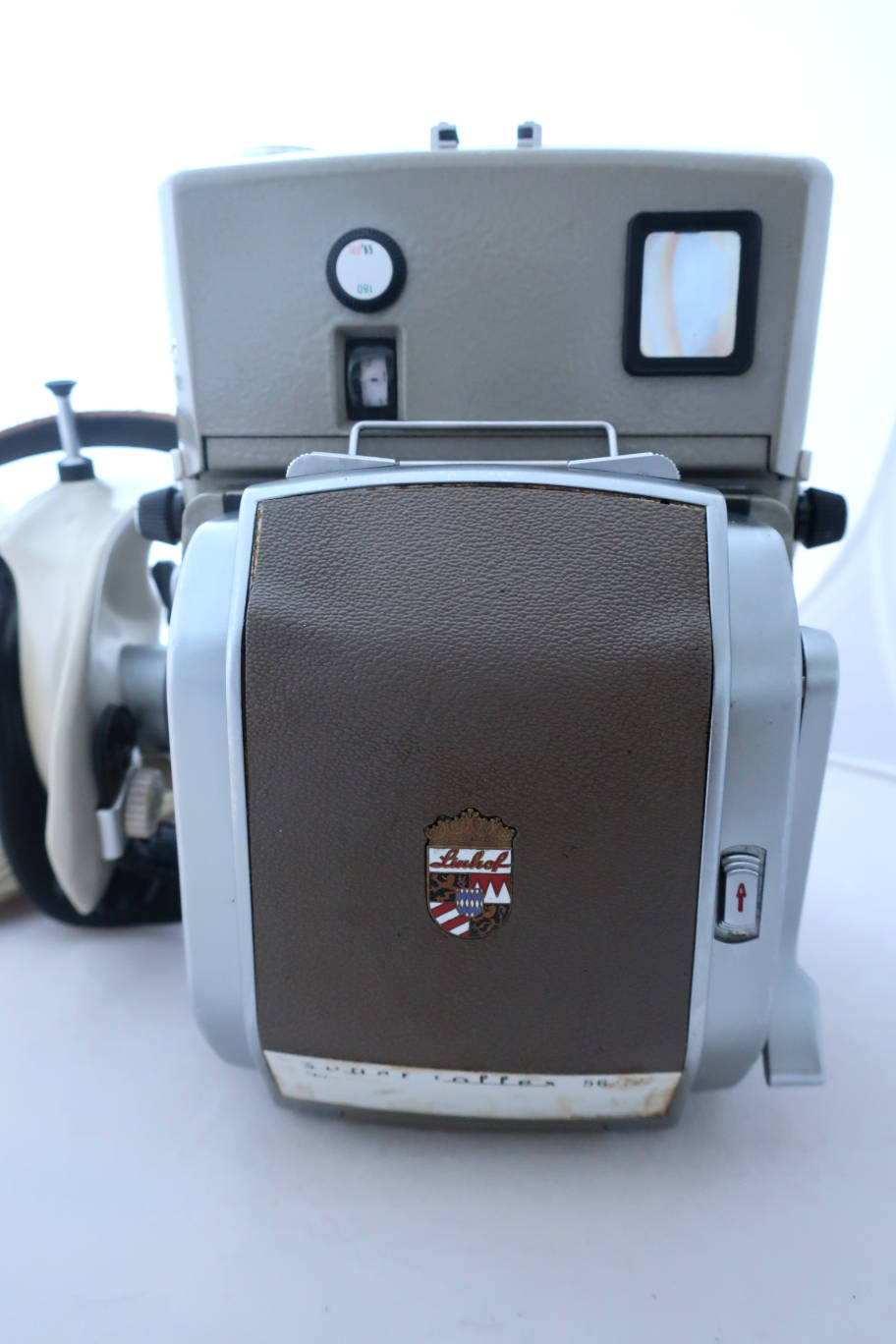 Seen from the back. Roll film back. The backs are not standard Graflex connection, they are whole units which change rapidly via a single lever quick release. 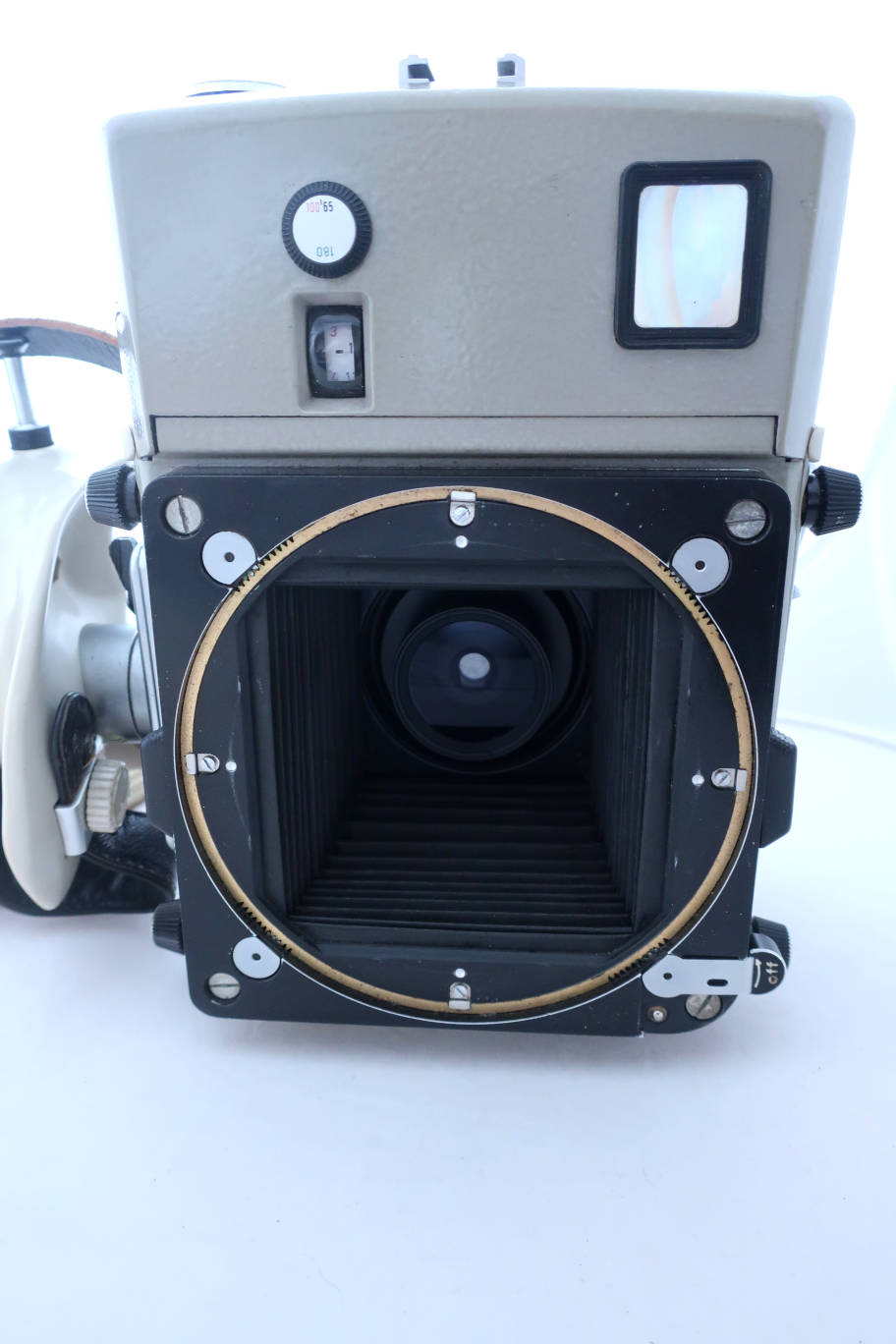 Back off. If you want a ground glass, you have to put a whole ground glass unit. The knob near the top puts a tele mask. Under the knob is an automatic distance indicator. 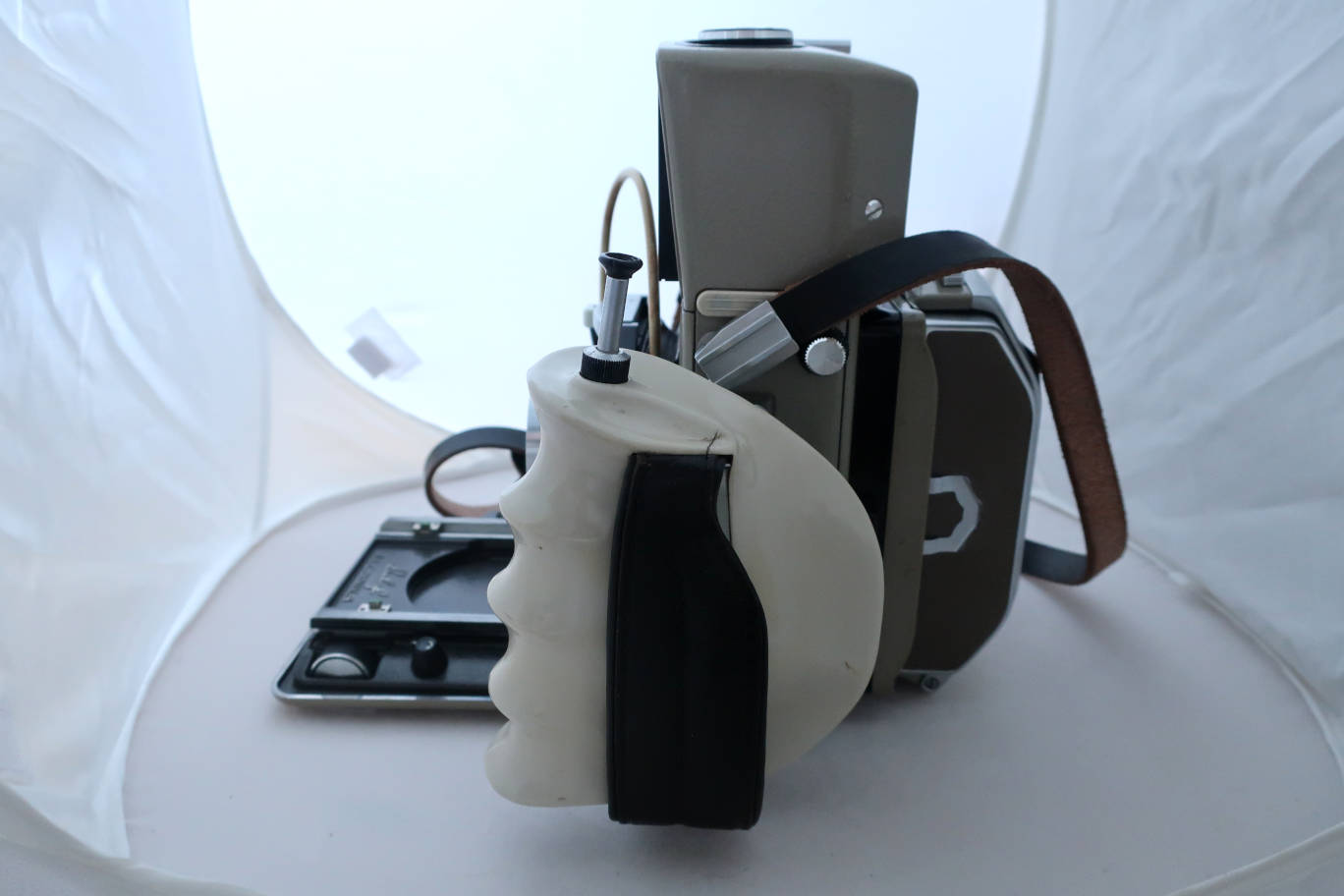 Seen from the right. Massive grip. 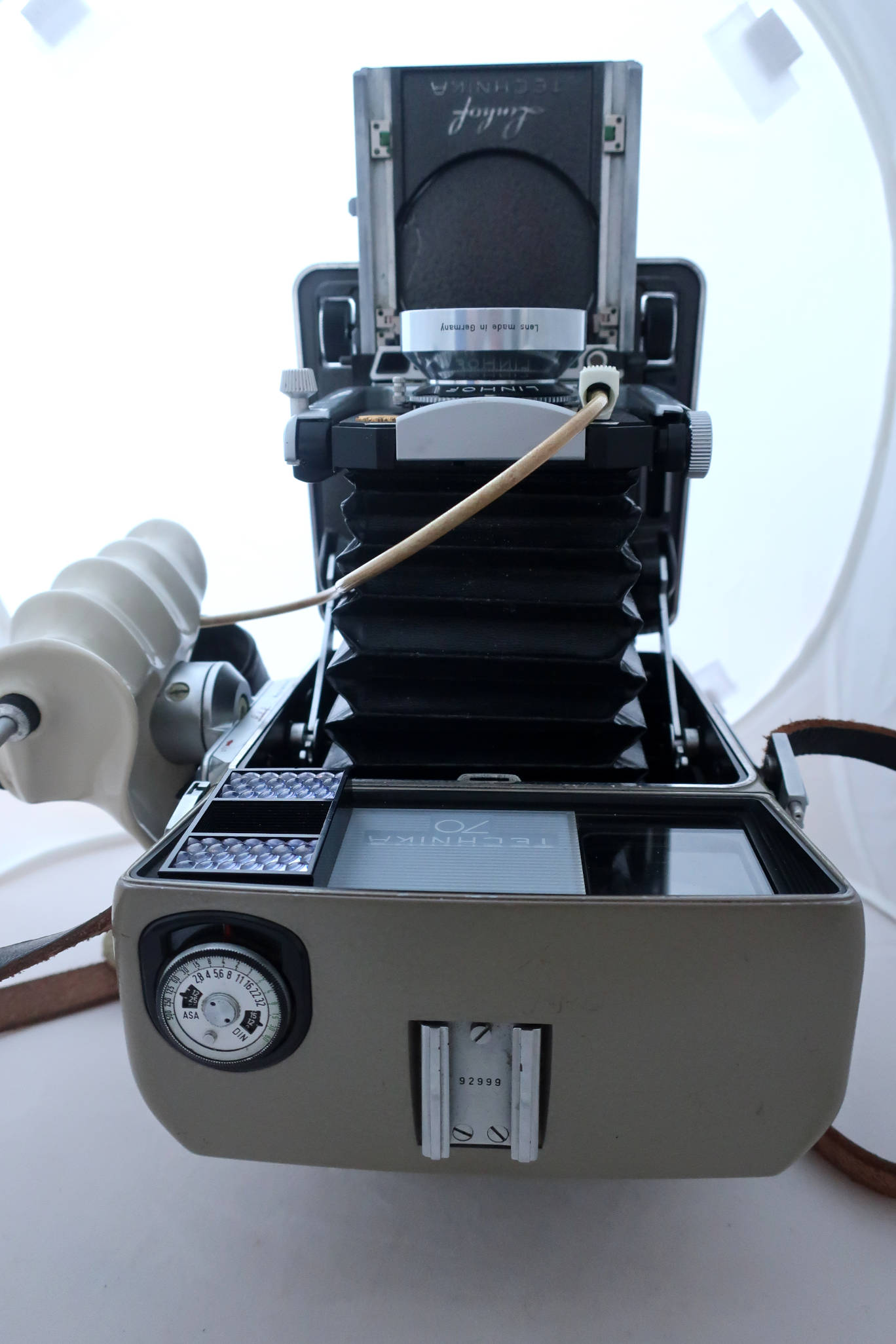 Seen from the top. The serial number is on the accessory shoe. Light meter integrated into the housing. 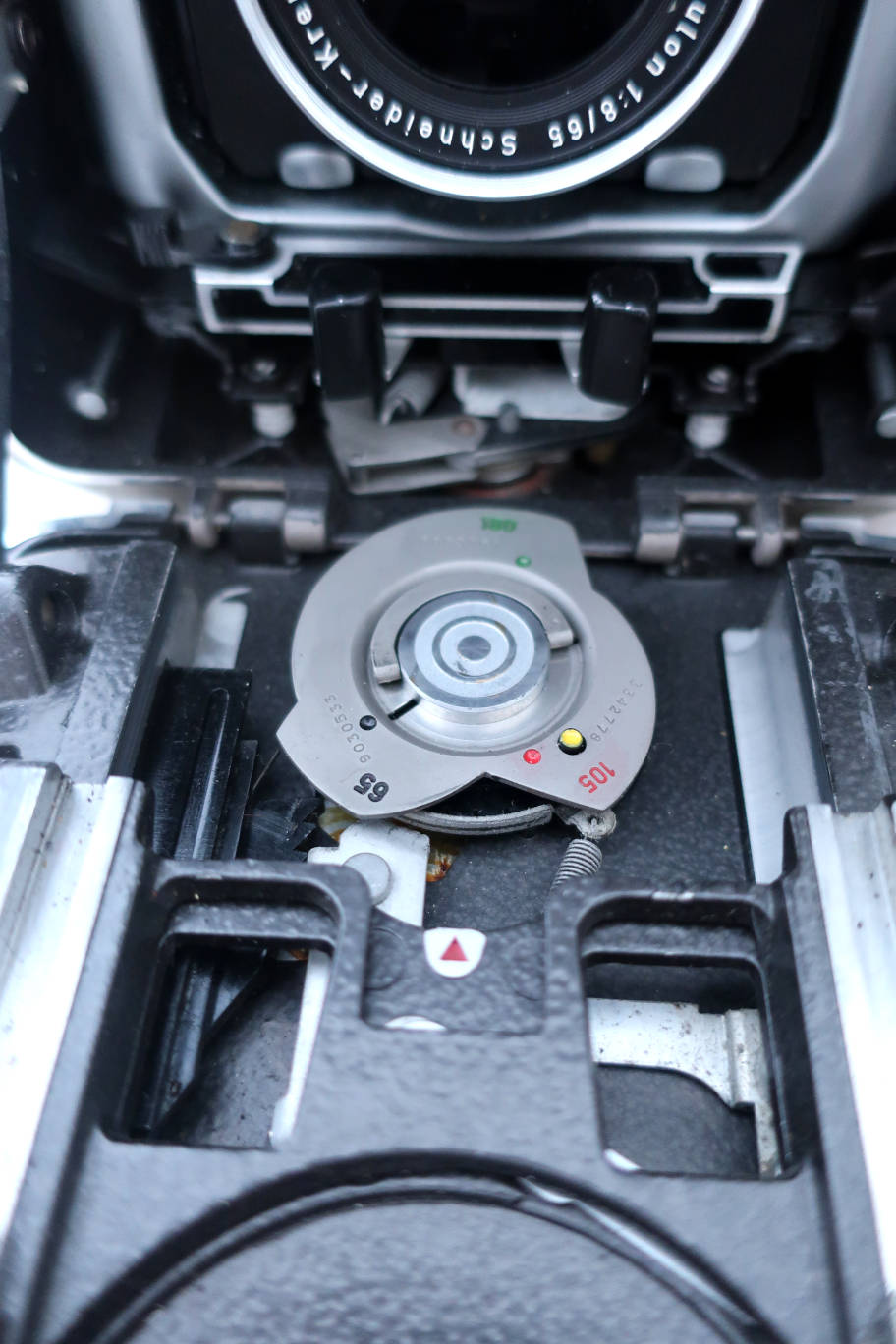 The 3-lens combined rangefinder cam. As they are individually made by the Linhof factory, the according lens numbers are engraved. I have advanced the bed to make it fully visible. If you just open the camera with the bed in normal position, the little arrow on the sliding part will point to focal length chosen. There is a slider on the left side of the bed to change the focal. Please refer to the manual. 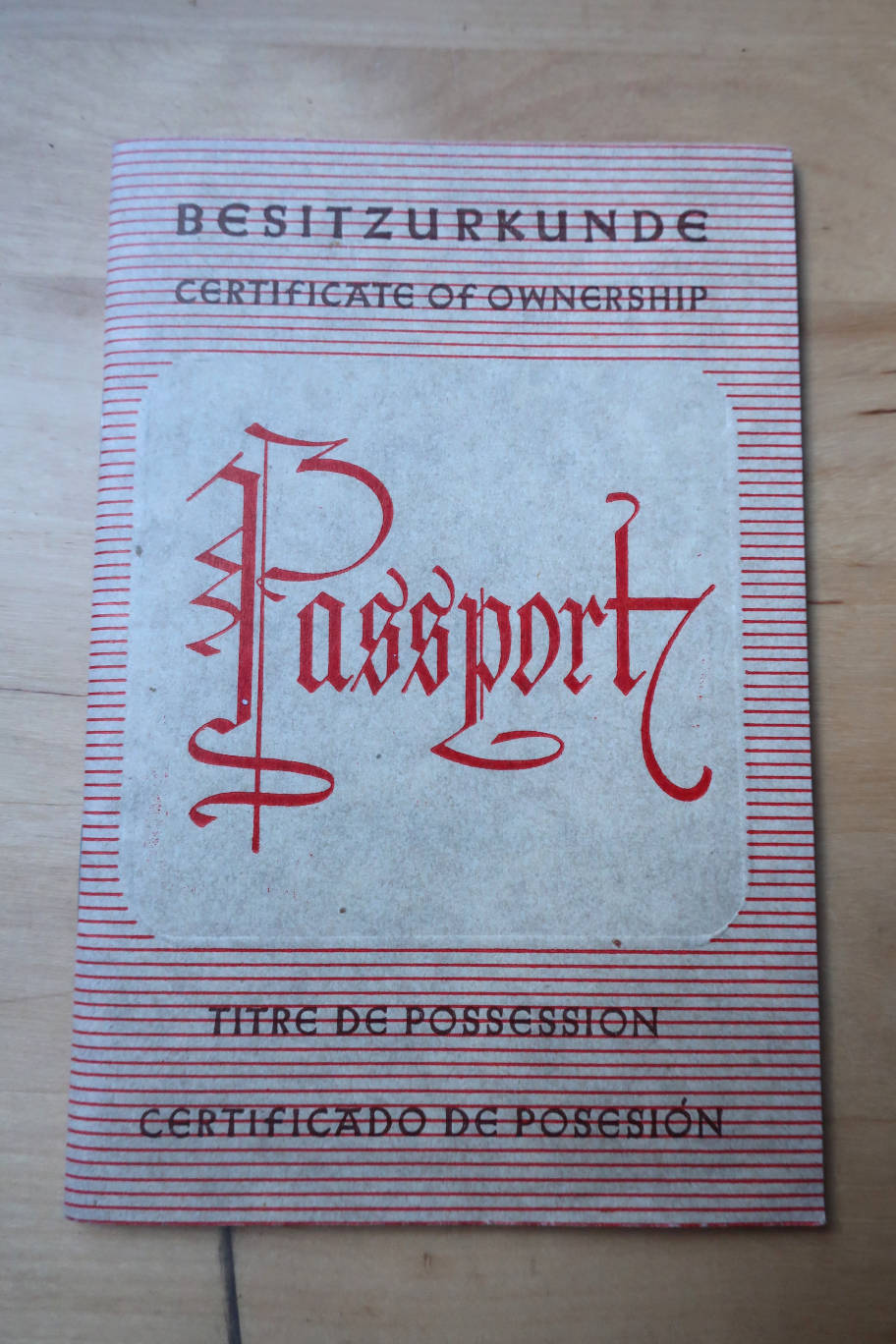 
It's a very nice camera, easy to use. It is built like a tank, very ridgid and quite heavy. The choice of movements is huge, but you need an extra ground glass back. Accessories are available, but tend to be on the expensive side. Very wide angles are a problem, Graflexes are easier for this. The Technika 70 is a workhorse, made for rangefinder use.  The built-in light meter is reliable and doesn't need a battery. It's very handy. If you need a camera that can easily switch between the 3 standard focals and you want a marvellous big reliable rangefinder, this is your camera.

I did not keep mine. As I have a 4x5 Super Technika IV and 2 Graflexes that are no bigger and can also be used with roll film backs, it doesn't make sense. The weight and size of the camera is a real handycap, a 4x5 Graflex weighs 1 kg less. I also own several Mamiyas of the 23/Universal series. With the 23 I can even have some back movements with the standard lens and stay well under 2 kg..

These cameras are 40 to 50 years old. If you want to buy one, look for a reliable seller. The main feature is the rangefinder. So check the rangefinder with care. Dust and worn mirror coatings can make it unusable and the camera makes no longer sense. Make sure that you have the matching cam for your lenses. Check all lenses and shutters. Check, whether the light meter works, it's very useful. Try to buy a complete, matching set. Any extra accessory will be expensive. Good luck!